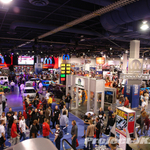 Standing on the back side of SEMA 2006, I’d have to say that I’m really glad it’s finally over and that I’m finally back at home.  Believe me, as much fun as I had at SEMA this year, there were definetly times that it also felt like a hell of a lot of work.  Walking for what seemed like miles of aisles, weaving in and out of the crowds and checking out endless display after display really had a way of wearing you out.  But then, if you want to be in the know and stay up on top of what the aftermarket industry is doing, no place will deliver the goods the way SEMA does.

With over 34 Jeep JK Wranglers hooked up, modified and on display by manufacturers such as Full Traction, PUREJEEP, Superior Axle & Gear, TeraFlex, Bestop, Toyo Tires, Donahoe Racing, Rancho, Skunkwerks, AEV, Bestop, Tuffy, Skyjacker, Bushwacker, Superlift, WARN, Rubicon Express, Ramsey Winches, Avenger Superchargers, Kilby Enterprises, Warrior Products, Burnsville Off Road and a few more that I’m probably missing, I’d have to say that this year’s SEMA Show was by far one of the very best that I’ve had a chance to attend.  Seriously, just about anyone who’s anyone either had a Jeep JK Wrangler of their own or at least had their products on another manufacturer’s JK that was on display. 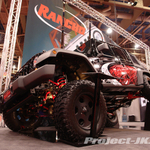 Over all, I’d have to say that I was really impressed with what all the manufacturers were able to accomplish in such a short amount of time.  And, with the exception of the gigantic 20″ ‘bling-bling’ wheels that a few of the Jeep JK Wranglers were wearing, just about everything at the show looked really hot.  Of course, if there were just one Jeep JK Wrangler that truly stole the show, I’d have to say it was probably Rancho’s with its 4″ long arm kit and radical reverse tri-link design in the rear.  It was at least what everyone was and still is talking about.  Now, if I could pick a very close runner-up, I think I’d have to say that the Jeep JK Wrangler Unlimited pop-up camper and the Euro Style stamped front bumper made by AEV (American Expedition Vehicles) both did a very good job of creating a lot of buzz on the internet as well.

Having said that, I really think kudos needs to go to Full Traction for having a suspension lift kit on more Jeep JK Wranglers than any other manufacturer, Teraflex for having the biggest Jeep JK Wrangler (6″ long arm kit and 39.5×13.50 IROK’s), Donahoe Racing for their innovative adjustable control arm design and variable rated springs, Jeeperman for their beautifully designed rear winch bumper tire carrier, Superior Axle for being the first to have a set of chromoly rear axles, Bestop for their well designed tube doors, Skunkwerks for their way cool stripped down orange ‘Jeep King’, Mastercraft for having a HEMI under the hood, Skyjacker for having the best display and Superlift for winning the Daimler Chrysler Design Excellence Award.  Really, the list could go on and on.  And, rather than glossing over everything with a simple generalization, I’ll try to cover a few of these Jeep JK Wranglers in much greater detail in the days to come.

In the meantime, I’d like to invite you to re-visit the 2006 SEMA Photo Gallery where we’ve just finished reorganizing all the photos by Jeep JK Wrangler.  And, wherever possible, we have also included a detailed list of all the parts and accessories they have on them.