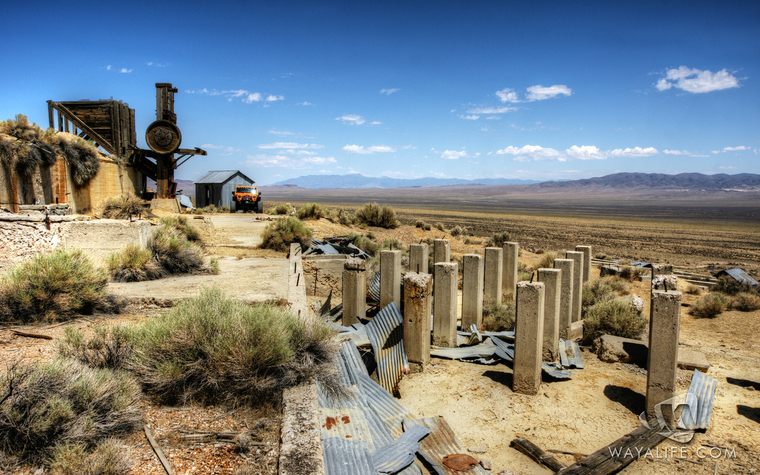 In 1905, gold was discovered in the Seven Troughs mountain range which is located deep in the Northern Nevada desert. By 1907, miners from Tonopah and Goldfield flocked to the area after an assays of $100,000 a ton was revealed and a town bearing the name of the range it resided in was established. Before the end of the year, over 350 people, a post office, several stores and saloons inhabited Seven Troughs. Even after a deadly flash flood killed 8 people and destroyed most of the town and surrounding camps in 1912, the town continued to proper for the better part of 10 years as it produced approximately $2 million in gold. By 1918, the gold veins began to play out and efforts to drain and haul ore started a rapid decline in population. To help address these issues, the Nevada State Mining Co. decided to dig a 2.5 mile tunnel through the mountain and, in spite of the discovery of several gold veins, boring was ultimately ceased in 1934 after wet rock caused the cost of continuing to become unviable. While the town of Seven Troughs and it’s surrounding camps, Vernon and Mazuma were abandoned by the 1930’s, small scale mining in the area continued on and off well into the 1950’s and man named Art lived in the neighboring town of Tunnel (the one established for the boring of the 2.5 mile tunnel through the mountain) until his passing in the late 1990’s.

Back in the middle of July, Cindy and I decided to make a trip to explore what is left of this remote and relatively well preserved mining district. From there, we headed north to a major cross road in the Emigrant Trail known as Rabbithole Springs before making our way east back to civilization. I hope you enjoy.