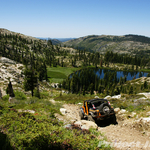 About an hour north of Lake Tahoe and deep into the Sierra Nevada Mountains, the northern most stretch of Highway 49, also known as the Mother Lode, crosses through an area containing more than 45 glacier carved lakes, and because of it, has been given the name, Lakes Basin. Crowned with an ancient volcanic peak known as the Sierra Buttes, this area was once buzzing with activity and populated with thousands of miners trying to strike it rich. Of course today, about the only thing buzzing around are mosquitos. Thanks to its remote location and being in a county that has one of the lowest populations in the state, the Lakes Basin is a perfect place to get away from it all and explore California’s rich history in a way that might have resembled what it was like over 150 years ago.

For our Gold Rush Run, we decided to explore the short but difficult rated Snake Lake Trail which is located on the eastern edge of Gold Valley and then circled around down and out west on the Mother Lode Highway until we reached the historic town of Downieville. From there, we headed on a long journey north and off pavement to the old mining town of Poker Flat and eventually, La Porte before calling it a day. Here are some pics from our trip, I hope you enjoy.