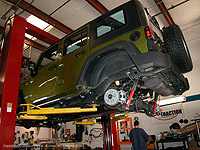 As if being one of the lucky few to get their hands on a pre-production Jeep JK Wrangler 2-Door months ahead of the competition wasn’t enough, Full Traction decided they needed to get their hands on a 4-Door Unlimited Rubicon as well. And, as you can see in this photo that I just got last week, they aren’t wasting any time getting it hooked up and ready for the rocks.  Hell, I don’t know if I could say that Full Traction has been wasting much time on anything lately.  In fact, I’ve been told that in addition to the 2″ Econo Lift, 3″ Economy Lift, Ultra Heavy Duty Adjustable Track Bars and Ultimate Lower Control Arms that Full Traction has already released, we can also expect to see a killer 4″ Ultimate Lift being released in about a weeks time and an Ultimate Long Arm kit by SEMA.

So, when can we expect to see the goods (and, I mean the real goods – no more of this Photochopped or JK’s sitting on stands) installed on a 2-Door or 4-Door Jeep JK Wrangler?  Well, I can’t say for sure on the Full Traction 2-Door as I believe it’s gone in for painting this week, but I’m pretty sure that their Unlimited Rubicon was finished being built up on Saturday and so I might be able to grab a few shots of it in the next day or two.  But, if you’d prefer to see them up close and in person, I can tell you that both will be on display at the 2006 Off Road Expo at the Fairplex in Pomona, California this October 7th-8th.