Back in December of last year, a member of JK-Forum.com started a thread that showed photos of him doing a run up Bronco Peak in his new Jeep JK Wrangler 2-Door Sahara.  At the time, he was riding on little more than a budget boost and 33″ tires and although he was able to make it through with some effort, it was his belief that it simply couldn’t be done in a 4-Door Unlimited.  Of course, upon hearing this, I knew Bronco Peak was a run that I would have to do in my Rubicon Unlimited and do as soon as I could.  Unfortunately, it wouldn’t be until last weekend that I would finally get my chance but I am glad that I finally did.

For those of you who aren’t familiar with Bronco Peak, it is a short trail that is situated within the Corral Canyon OHV area and is located just south of I-8 near to the town of Alpine and about half an hour east of El Cajon.  According to the Southern California Back Roads & 4-Wheel Drive Trails book by Charles Wells, Bronco Peak is an “difficult” rated “nasty hardcore trail… very steep with tight brush… large boulders” and that “several places are steep enough to cause a rollover if driver is not careful… front and rear lockers are recommended.” And, even thought it’s only 2.7 miles long, it is also recommended that you allow about 2 hours to complete it and more if you are going with a bigger group. Being that it’s so short, most people elect to run another short but “difficult” rated trail nearby trail called Sidewinder and that’s what our group decided to do first.  Unfortunately, it would also be the only trail that a majority of our group would do. 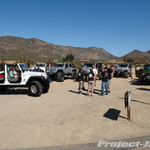 After a delicious breakfast over at Janet’s Montana Cafe, which, if you can believe it, is actually located in a mini-mall called “The JK Corral” in Alpine, CA., we made our way over to the Corral Canyon OHV area and met up with the rest of our group.  By the time we were done airing down at the Four Corners Staging Area, I counted a total of 10 rigs along for the ride; 3 JK Unlimited Rubicons, 2 JK Unlimited Saharas, 2 JK 2-Doors X’s, 1 TJ, 1 LJ and if you can believe it, one old Sammy.  With the exception of one of the 2-door JK X’s along for the ride (who was just sitting on a budget boots), everyone else in our group was moderately to heavily modified and so far as I could tell, nobody should of had any real problems on these trails… or, so I thought anyway. 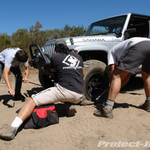 Now, if you can believe it, after pulling off the pavement and moving quite literally about 500 feet down the Sidewinder Trail, I got a call on the CB stating that Dave (SGT. EVIL) had a busted bead.  Being that we hadn’t even really started the trail, I simply couldn’t figure out how this could of happend and as it turned out, he didn’t bust a bead.  Apparently, even though it was rotated up and out of the way, the bolt attaching his disconnected sway bar link to the sway bar was sticking out just far enough to catch the sidewall of his tire and it tore tore it open.  Laughing it off and dismissing the incident as a fluke, we quickly changed out his tire, pull the links completely off his front swaybar, zip tied it out of the way to prevent any future occurances and continued on our way.  Little did we know, this was more than just a fluke but rather, a sign of how things would go for the rest of the day. 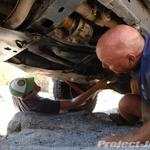 About half way into Sidewinder, we came across a granite face that had a fun ledge that you could climb or bypass.  After several of the JK Unlimited’s in our group were able to climbed up and over this ledge with ease, Jason (premo) decided to give it a try in his 2-Door X and after several failed attempts, he decided to call it quits.  When it came to Ty’s (SoCal JK 2dr) turn, the other 2-Door X, he made several valiant attempts as well, was able to get his front tires up the ledge and almost made it at least once but on his final attempt, his rear drive shaft blew out and he was done for the day.  If that weren’t bad enough, while we were working on pulling his drive shaft, Dave discovered that he had yet another flat and this one caused by a large bolt that had cut deep into the tread.  Needless to say, while Jason and I worked on Ty’s drive shaft, Mel from Off Road Evolution jumped in to help plug up Dave’s tire.  Fortunately for us, we were close to the end of the trail and all would be good… or, so I had hoped anyway.

Although we were almost off the trail, there were still several significantly difficult obstacles to conqure including a steep drop off a granite ledge and being that Ty only had his front wheels to work with, we decided to hook his JK up to Paul’s (lensman) so that he could help Ty up and over some of the tougher sections ahead.  And, while everything looked good and as if we were going to be in the clear from here, we would soon find that nothing could be further from the truth.  Soon after we got going again, the U-joint on Ty’s drivers side front axle decided to blow out and that pretty much put him dead in the water.  As luck would have it, we had Mel from Off Road Evolution with us on this run and being that he had the most experience and most qualified rig in our group, he decided to double back and essentially flat tow Ty’s JK off the trail.  And, let me tell you, watching a JK working it’s way up and over difficult boulders, down steep faces and all with another JK being pulled behind it was truly some of the most impressive wheeling I have seen in a long time. 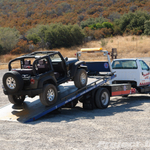 Back at the Four Corners Staging Area, Doug (Trail Bud) made a quick call to AAA and had a tow truck come out.  Being that he had been the recipiant of similar good will in the past, he wanted to use his newly upgraded roadside assistance plan to help Ty get his JK home just as Jen (toad) and Jeff (Bullfrog) had done for him in the past.  Just to give you an idea of how generous of a gift this was, without Doug’s help, Ty would have easily been looking at a $1400 towing fee.  Of course, with his new plan, it would be free.  Need I say, if you don’t have a AAA premium road side assistance plan, now might be the time to get one.

With all the flats, break downs and waiting around, our quick little side run up the Sidewinder Trail turned out to be an all day affair and so by the time we were able to see Ty and his family safely on their way home, most in our group decided to call it a day and go home as well.  But, being that we still had a few hours of daylight left, Cindy, our son Andrew and I decided to stick to the original plan and run Bronco Peak with Mel and Andrew of Off Road Evolution. 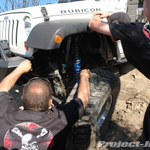 Running the trail backwards as Charles Wells recommends and being that there was just the two of us, we were able to burn through about half of the Bronco Peak trail even with all the stops we made to film and photograph our excursion.  However, soon after we made our way over the summit, I ended up having a break to my front track bar mount at the frame.  It was a stupid break and one that could have been prevented if I had taken the time to install a required bolt on my Full Traction track bar drop bracket but never got around to doing for a number of reasons.  Of course, one of the reasons was that I figured I had been running without it for about a year, over tough trails both in Moab and in the Sierra Nevada’s and without any problems so I was probably didn’t need it.  In reality, the mount looked to have been tearing for some time now and this just happend to be the run that it decided to let go.  Anyway, with a lot of help from Mel and Andrew, we were able to use a ratchet strap to pull the track bar mount back together, stuck a 1/4″ ratchet extension through the missing bolt hole to pin it in place and then used duct tape to hold the extension in place.  It may not have been pretty and I still had very limited steering to the left but it was certainly better than nothing especially being that I had about a mile and a half of really tough trail ahead and tight narrow switchbacks I needed to descend. 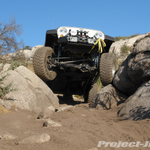 If it weren’t for the fact that I was handicapped, I think the last leg of Bronco Peak would have been a lot more fun.  However, with the sloppy front end that I had, virtually no ability to turn left and trying as hard as I could to not make the break I had any worse, I have to say that getting of this trail was some of the most difficult wheeling I had done in a long time.  I think more than anything, my limited ability to turn left was the thing that I struggled with the most especially when trying to negotiate super tight switchbacks and trying not to fall off a ledge at the same time.  But, when all was said and done, the crazy bandaid that Mel and Andrew applied did the job and I made it back to pavement.  Unfortunately, enough stress was still applied to the remaining factory mount that the existing break became amplified and the Full Traction drop bracket ended up suffering a break as well.

With matters made worse, the drive back to I-8 was nothing short of an adventure.  Up until now, I had never personally experienced the dreaded death wobble but in course of 8 miles down twisty roads at night, I had to endure over a dozen severe episodes of it.  By the time we made it to the highway rest area, Cindy and I decided that it would be stupid to drive our JK any further and so we made our own call to AAA and had a tow truck come out for us.  Fortunatley for us, we knew there was an Off Road Warehouse down in El Cajon, which was only about 30 miles away, and that’s where we had our JK taken to and that’s where we went to spend the night.  The next morning, Neil Bradley took us in right away, had one of his guys assess the damage, gave us an estimate to have it fixed and took care of us at a fair price.

In spite of all the carnage we saw and personally suffered on this trail, I have to say that I still had an outstanding time if for no other reason than the fact that I was able to do it with so many great people.  Seeing everyone coming together and helping out wherever they could and however they could was truly inspiring and something that I think you can only experience in situations like these.

If you would like to see all 373 photos that we took on this trip, simply click on the banner above or on the link below: