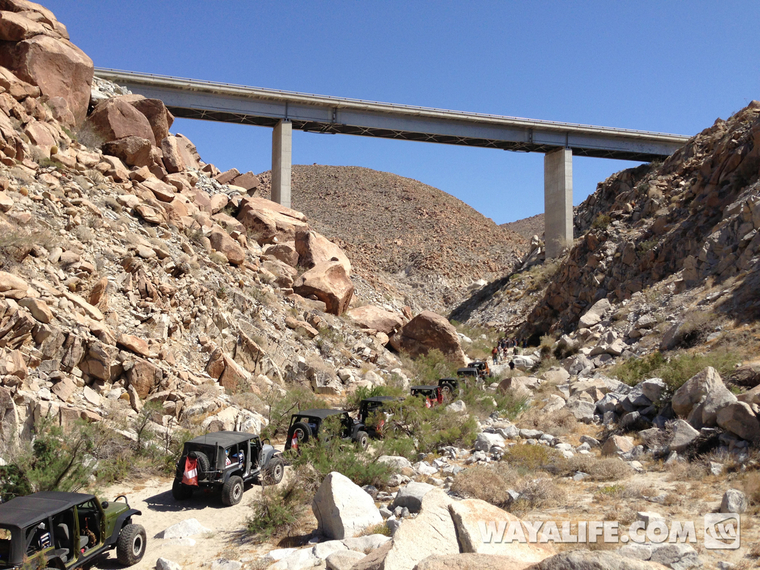 Years ago, I had heard of a short but badass trail down by the Mexican border called Devil’s Canyon that used to be a part of the original stage route that connected San Diego to Yuma. From what I had read, it was established back in the mid 1800’s, improved upon in the early 1900’s to help accommodate the first automobiles but, was soon abandoned after the completion of U.S. Highway 80. This trail did see some use again during the construction of Interstate 8 back in the 1960’s but a major storm in the 1970’s would all but erase it from history.

From what I have gathered, back around 2006, a few guys decided to look into this old route to see if it could be run and, before you knew it, Devil’s Canyon was quickly becoming a hot trail in the San Diego area that everyone wanted to run including me. Unfortunately, this renewed interest in this trail and increase in traffic ultimately lead to its closure just 6 months later. Since then, I had all but forgotten about this trail but when I started getting word that people were running it again and legally, I decided I needed to look into it. After doing some research, I found that the BLM was in fact allowing limited access to Devil’s Canyon BUT, by permit only. And, after going through the arduous process of trying to obtain one myself, I can tell you that it might as well still be consider CLOSED!

Seriously, the whole thing is a joke. Not only do you have to apply for a permit 180 days in advance, you are only allowed to run the trail on one of seven Saturday’s between October 1st and April 30th and it cannot be on a Saturday following a previous run. In addition to that, you are limited in the amount of vehicles that can participate in your run, required to pay $100 just to apply for the permit, need to fill out a 27 page application that includes plans for medical emergencies and evacuation routes and if that weren’t enough, required to provide liability insurance for $500,000 per occurrence/$1,000,000 aggregate! Even if you are willing to jump through all the hoops, that last part is the kicker. Pretty much every insurance company I called told me the same thing – the BLM doesn’t want you on that trail!

So you know, I first started to look into running this trail back in September of 2012 but wasn’t able to get an approved Saturday to run it until April 27, 2013. Of course, there was the matter of insurance and up until Thursday, April 25th, I wasn’t sure it was going to happen. If it weren’t for Off Road Evolution stepping in and helping us out with insurance, none of this would have been possible – THANK YOU OFF ROAD EVOLUTION!!

With that, you can click on the link below to see a few pics from our epic Devil’s Canyon run. As you will see, we decided to make things more interesting and run it from east to west or, from bottom to top. If there was any doubt, it really is a challenging trail and made more for a short wheel base 2-door. While everyone in our group was running a long wheel base Jeep JK Wrangler Unlimited, everyone was at least on 37″ tires or bigger and most were running EVO MFG coil overs. I hope you enjoy.