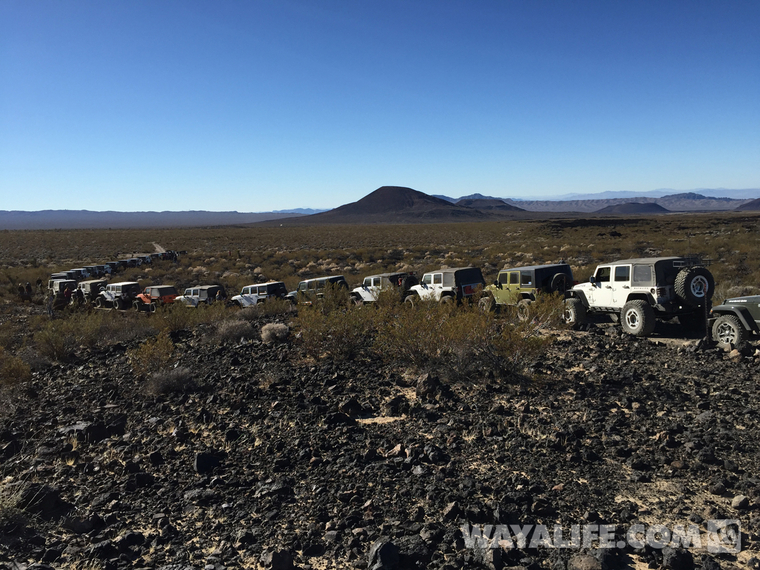 With a convoy of 60 Jeeps that stretched about a half a mile long when parked end on end and well over 2 miles long when moving across the trail, the 2015 WAYALIFE New Year Kick-Off Run was by far the biggest runs we’ve done to date and maybe because of it, one of the most fun ones we’ve done as well. Certainly, having a starting point so close to Primm, Nevada didn’t hurt as it allowed more than half of our group to meet up the night before and party with new friends and old.

For those of you who weren’t able to join us, we started our run from the north east corner of the Mojave National Preserve, made our way to the Cinder Cone National Natural Landmark where we explored a lava tube there, cut through the Old Dad Mountains, drove over a section of plank road, visited an old ranch called Sands, climbed up to the mysterious Mojave Megaphone, examined the petroglyphs at Mesquite Springs, climbed our way up Spooky Canyon, forded two deep water crossings and 75 miles later, worked our way out of Afton Canyon and back on to pavement again. Unfortunately, with a group this big, it was all that Cindy and I could do to keep everything organized and moving and so it was next to impossible to take as many photos as we would have preferred but, here are a few shots of what we were able to take as well as shots that others were able to take. We hope you enjoy.