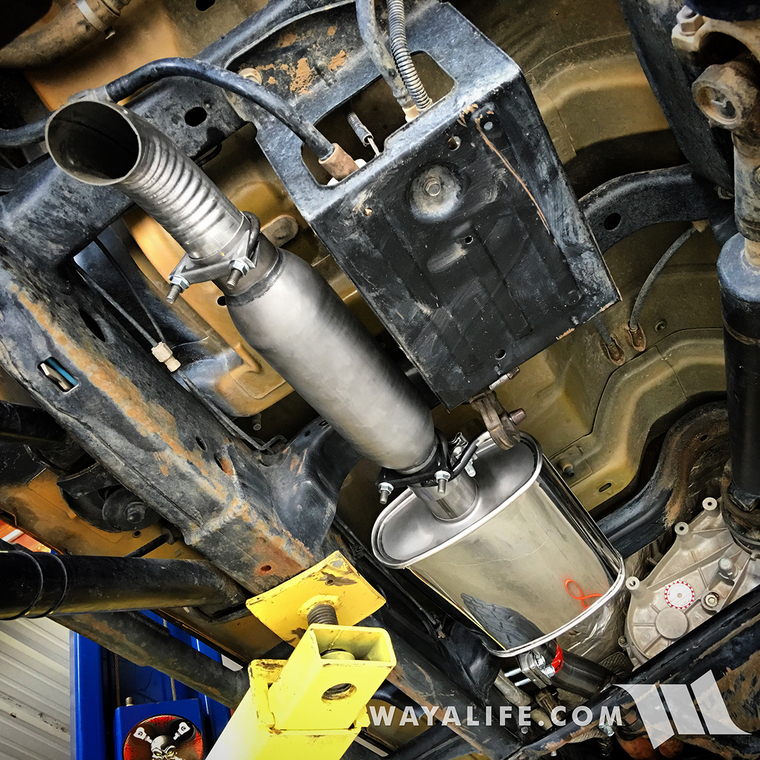 Back when Moby was still running a 3.8L V8 motor, we ran a Dynomax Ultra Flo Evolution Competition exhaust system as it fit well with our EVO Lever System and loved the way it sounded. There were times where people would literally ask us if we had a V8 under the hood as it had a really nice throaty purr to it but no so loud that it was bad at highway speeds. Needless to say, when it came time to install a new exhaust system on Rubicat, it’s what we decided to run again. Unfortunately, what we soon discovered is that with a newer 2012-up JK Wrangler, the sound of this exhaust system was a bit “different” to say the least and in spite of the fact that it was the exact same kit. The problem was, the newer 3.6L motor has a less than pleasant sound all on it’s own and one that Chrysler used a resonator to help mellow out before reaching the muffler. And, the problem for us was that we needed to remove the resonator in order to run the Ultra Flo Evolution Competition exhaust system. While the fitment was good and the sound wasn’t too bad, we found there was a pretty heavy drone while running at highway speeds. Around town or on the trail, it wasn’t even noticeable or at least not to us but on really long drives, like heading out to Moab, it could become mind numbing.

After Dynomax announced the release of their all new QuietCrawler Performance Exhaust System earlier this year and noted that it was “specifically designed to provide high clearance for rockcrawling and quiet acoustics for everyday driving in your 3.6L Jeep Wrangler 4 door”, we knew it was something we had to try. The only problem was that the kit was really made more for a JK Wrangler that has a tailpipe that goes all the way to the back and so we weren’t sure if we could get it to work with our EVO Lever. Fortunately, Matt over at Dynomax was able to help us figure things out and after ordering up a kit, I was able to get it installed over the weekend. Click on the link below to see some shots of what it looks like installed as well as a few that shows what I had to do to make it work.