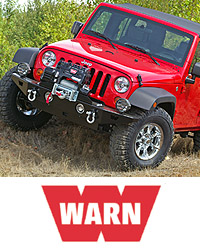 Over the past 58 years, WARN Industries has been a premier leader in the development and manufacturing of high quality parts and accessories specifically designed for Jeeps.  And, with the introduction of the all new 2007 Jeep JK Wrangler, you know you can count on them to deliver the goods especially when it comes to hard core front and rear end protection.

Much like the heavy duty bumpers that WARN already makes for TJ Wrangler today, the new JK Wrangler Rock Crawler bumpers will be constructed out of laser cut, CNC formed, robotic welded, 3/16″ plate steel that is finished with a durable black powder coat.  Both front and rear bumpers are full length, have tapered ends for optimal approach/departure angles and come standard with two D-Ring shackle mounts.

Also worth noting about the WARN Rock Crawler Front Bumper is the fact that it has been designed to incorporate the factory fog lights in their original location and that it comes with additional mounting points on top of the bumper itself to allow for the installation of aftermarket driving lights.  For those of you who are interested, WARN will also be offering a separate winch plate that bolts to the top of the Rock Crawler bumper as well as a steel pre-runner style skid plate designed to replace the factory plastic air dam underneath it. 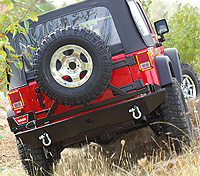 As far as the back end goes, WARN decided to break from convention and do things just a little bit differently.  Instead of making a wrap around rear bumper that would mimic the factory lines exactly and have it sit flush with the width of the rear fender flares, WARN decided to pull in the sides of their Rock Crawler Rear Bumper and designed it in a way that made it look as if it were tightly hugging the rear quarter panels.  Another thing worth mentioning about the WARN Rock Crawler Rear Bumper is that it comes with a swing away tire carrier which will allow you take the weight of a large and heavy spare tire off your tailgate and relocate it on to your much stronger bumper.

Unfortunately, no pricing is currently available for these bumpers and from what I’ve been told, they won’t be available for sale until early December.

Special Thanks:  I’d like to thank Quadratec for providing me with this exclusive press release as well as the hi-res photos that accompany it.